aeWorldwide is less an aid organisation than an organisation that connects people, reduces prejudice and facilitates appropriate integration. The aim is to reshape the image of the refugee and to counter the growing exclusion of thousands of people. Despite arbitrary national borders, commonalities can be found and a fruitful togetherness can be formed. 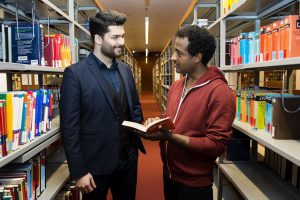 It is a first step to start at the university, where students develop compassion on the basis of commonality when they realise the academic refugee was originally in a very similar situation to them and that the chaos arose from external factors. We stand in the postcolonial tradition and strive to avoid any hierarchy between “the helpers” and “the helped”. For this reason it is, on the one hand, a tandem programme and not a mentoring program, and, on the other hand, a relationship between peers. The practical knowledge advancement offered by German students with regard to German culture and bureaucracy is balanced as far as possible by the professional knowledge advancement offered by academic asylum seekers.

Thus, in order to prevent a hierarchy through educational differences and to facilitate the finding of similarities, we only include academic asylum seekers in the project. Academic asylum seekers are taken seriously for their being and their qualifications, and not reduced to the status of a refugee who “needs to be helped”.

The aim of an asylum seeker in joining this project could be to be recognised and supported as a person with a personality and competences for the first time since arriving in Germany, instead of being seen as a troubling intruder who must be helped for legal reasons. In the longer term, we try to use project participation to the benefit of participants’ asylum procedures and employment searches.